Six twelve oz bottles. Brewed with coriander and orange peel. Our Witbier-style ale delivers hints of coriander in the aroma, a light, effervescent body, and zesty citrus throughout. Beer powered beer. Hidden among 1,500 square miles of the Juneau Ice Field, the pristine waters of Alaska's Inside Passage and the bear-lined shores of Admiralty Island, Alaskan Brewing Company quietly brews some of the world's most award-winning beer in Juneau, Alaska. Like the land that inspires them, Alaskan beers are anything but ordinary. The same can be said of the people who drink them. Alaskan Polar Bears: Polar bears are native to the Arctic Ocean and can be found traversing the snow, ice and open waters along the northern coastlines of Alaska. Although they are closely related to the brown bears of Alaska, the polar bear is classified as a marine mammal adapted to the icy climate of the Arctic. Alaskan White Ale toasts this extraordinary bear and its place at the top of the world. The state of Alaska is more than 1/5 the size of the entire lower 48 states combined. Hops, water, grain malts, yeast = Alaskan Brewing Company = spent grain, dryer, steam boiler. Beer Powered Beer: Alaskan beers are brewed with energy generated by a steam boiler fueled entirely by dried spent grain - a byproduct of our brewing process. That's what we call Beer Powering Beer. We love Alaska, and our CO2 recovery system, water-saving mash press filter and innovative steam boiler are all steps toward allowing us to brew beer in the most efficient and cleanest way possible in this beautiful place we call home. Gear up at alaskanbeer.com - clothes, pints, gifts. 100% recycled paperboard. Brewed & bottled in Juneau, Alaska. Made in Alaska. 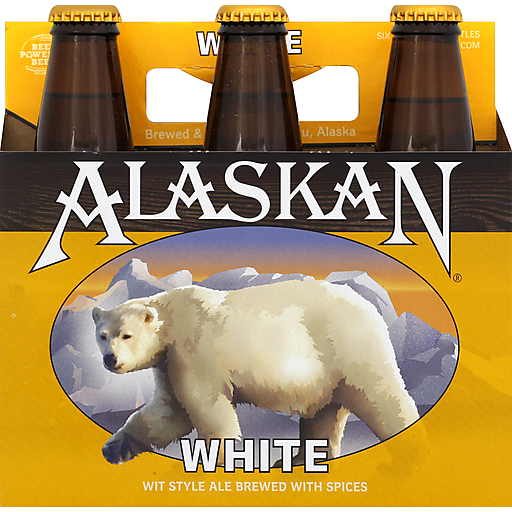