Made with cane sugar. An amazing blend of licorice, birch and Madagascar vanilla. Step right up! Thrill your tastebuds. Though not technically an island, the tiny peninsula of land in New York City's backyard has become known far and wide as Coney Island - The Playground of the World. For more than two hundred years, Coney Island has attracted fun seekers both local and worldwide. With spinning thrills, games of skill, treats on the boardwalk, the Atlantic Ocean and the horizon beyond, Coney Island is the end of the earth; the place where dreamers come together to mark their best moments on the roller coaster ride called life. History of the Coney Island Parachute Jump: Standing 250 feet tall and weighing 170 tons, the Eiffel Tower of Brooklyn has been a Coney Island landmark for the better part of a century. A system of steel arms, lift ropes, guide cables and parachutes drew thrill seekers from far and wide to the seaside escape of Coney Island. Originally designed for the 1939 New York World's Fair, the Parachute Jump relocated to the Coney Island boardwalk in 1941. Although it ceased operation in the mid-1960s, the Parachute Jump has remained an iconic symbol of Coney Island to this day. The fortune teller should have predicted this. The most dignified beverage of days past, reimagined for your future self. The wooden planks under your feet and a hotdog in your hand; the only difference is that now you're tall enough to ride the ride. Coney Island Hard Root Beer is a new twist on an old favorite. With hints of vanilla, licorice and birch, this root beer will bring you back to the boardwalk. When in New York: Visit our innovation brewery on Coney Island. Coneyislandbeer.com. Facebook. Twitter. Instagram. Snapchat. (at)Coneyislandbeer. Contains alcohol 5.8% alcohol by vol. Coney Island Brewing Company, Brooklyn, NY in collaboration with the Boston Beer Company. 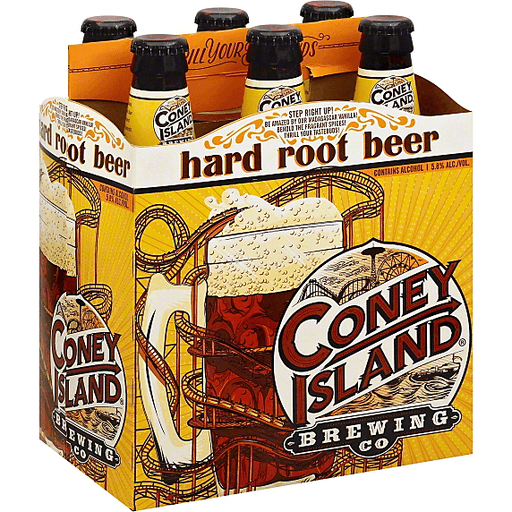