Ale aged on oak spirals. The hop syndicate is hoarding hops in a remote warehouse. This is not cool. We have to do something. Absolutely its our duty and our right. We have to break out of Alcatraz and fast. No worries brotha! Were gonna surf out! Oh ironing boards! No one has ever escaped from Alcatraz! - Except in the movies. No one has had such a good reason before. Good point Sully. Free the hops! In case we run into a great white: 1. Don't panic. Yeah, right. 2. Just kick shark in the nose. Okay fine, but we'll use your foot. 3. But him first. Oh brother. Count down to the great escape: 7 days. We can't make the people wait that long for hops! Busting the hops out of the warehouse. Nico wears dress to distract security guard. Shaun & Nico's epic escape plan from Alcatraz. Stow away two ironing boards from laundry room. 1. And grab laundry bags for carrying hops. 2. Sneak into sewer pipe at water tower. Oh, okay. No problem. We'll just sneak in. Don't mind the guards carrying machine guns. 4. Surf monster wave all the way to shore! Sully, one small problem: we don't surf. 3. Paddle our ironing boards through sewer into ocean. Seriously? The sewer? Seriously? Either you're with me or against the brotha! During the hop crisis, some brewers were forced to skimp on hops, depriving the people of their right to hoppy, aromatic beer. Demand hop justice! Shaun and Nico escape from Alcatraz! And brew the hoppiest beer known to mankind! Celebrate the right to be original. Just two blocks from SF Giants Park. 21st-amendment.com. 94 IBUs. 9.7% alcohol by volume. 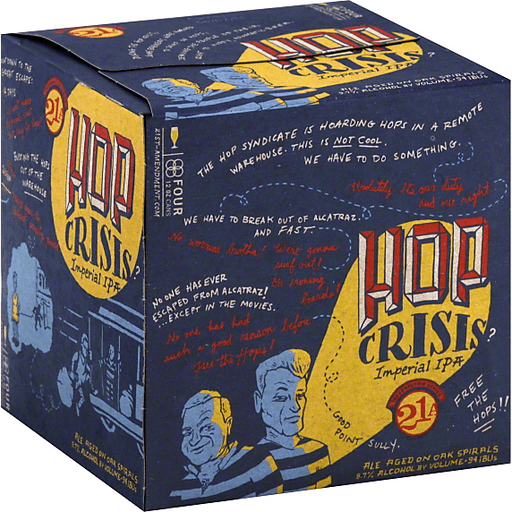