Beer Powered Beer. coastalcode.org. 1% proceeds for the ocean (Alaskan Brewing Co. commits 1% of all proceeds from Alaskan Icy Bay IPA to support the cleanup and preservation of coastlines and waterways in an initiative called the Coastal Code - coastalcode.org). In the shadow of Mt. St. Elias, surfers step from icy waters thirsty for a bold beer brewed to endure harsh ocean conditions. Crafted with Cascade hops for a citrus aroma and crisp finish. The state of Alaska is more than 1/5 the size of the entire lower 48 states combined. Yep, it's Cold. The surfers who ride the waves around Yakutat and Icy Bay have to be prepared for all of the extremes that come with Alaska's maritime climate. That can mean air temperatures well below freezing, and water temperatures not too much higher. It's sometimes called blue face surfing, and it requires a special breed of adventurer to seek out the rugged shorelines that yield the best breaks. Alaskan Icy Bay IPA comes from the heritage of a beer brewed to endure the long ocean journey from England to India, with a bold taste, brisk bitter bite, and a citrus hop aroma. For the surfers who venture into the cold waters of Icy Bay, it's a beer to match the intensity of a remote ride on a wave breaking on a solitary Alaskan beach. Photo credit: Local fisherman-turned photographer Scott Dickerson captures Alaskan adventures, lifestyle and epic swells off Alaska's coast. Scottdickerson.com. Beer Powered Beer: Alaskan beers are brewed with energy generated by a steam boiler fueled entirely by dried spent grain - a byproduct of our brewing process. That's what we call Beer Powered Beer. We love Alaska, and our CO2 recovery system, water-saving mash press filter and innovative steam boiler are all steps toward allowing us to brew beer in the most efficient and cleanest way possible in this beautiful place we call home. 100% recycled paperboard. alaskanbeer.com. Brewed & bottled in Juneau, Alaska. Made in Alaska. 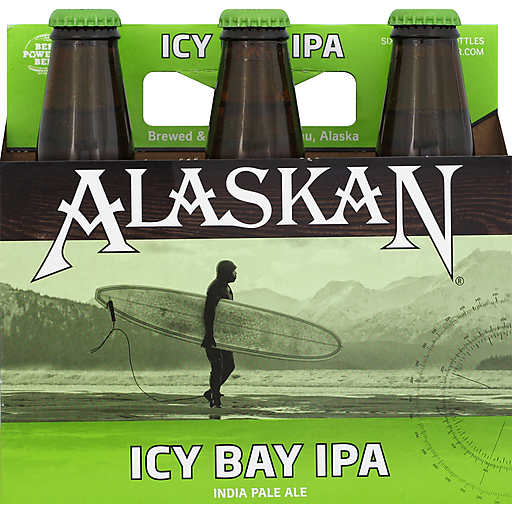