This box contains twelve 12 fl oz bottles of four different 10 Barrel beers. Apocalypse IPA. Joe IPA. Simcoe, amarillo & mosaic. Sinistor Black Ale. Seasonal Release. Bend, Oregon since 2006. Variety is the spice of life, and this beer box has a variety of different beers! Inside you'll find our two flagship IPAs Apocalypse and Joe, as well as Sinistor, a beer that's been around almost as long as the brewery, and our rotating seasonal. Enjoy! Brew beer, drink beer, have fun doing it. Follow 10 Barrel. Snapchat. Instagram: (at)10barrelbrewing. Twitter: 10barrelbrewing. Facebook: 10barrelbrewingcompany. We are on the internet at 10barrel.com. This Variety Pack Contains: Apocalypse IPA: Our flagship west coast style IPA. This west coast style IPA is our flagship beer. We can talk about how good we think it is, but if you like IPA's - just give it a run for yourself. 70 IBU's. Joe IPA: Brewed with simcoe, amarillo, & mosaic hops. This IPA was formally known as Sam named after its hops; simcoe, amarillo and mosaic, but we were told this would be a trademark issue with a large craft brewery out of the north-east, so we had to change it. We cycled through a bunch of generic names; Bob, Tim, Dick, Dan, Carl, Frank until we finally arrived on the perfect name for this IPA - Joe. 70 IBU's. Sinistor Black Ale: Deceptively drinkable dark beer. This beer has been around almost as long as the brewery. Don't be fooled by the name because this dark beer is light bodied and smooth with subtle hints of chocolate and coffee. 28 IBU's. Seasonal Release: Something new every season! Every few months we switch it up with a new beer to match the season. There are three bottles of this season's release in this box for even more variety! We are on the internet at 10barrel.com. We started back in 2006 with three guys in Bend, Oregon who shared one simple mindset; brew beer, drink beer, and have fun doing it. Since then our brewery has grown but we will always stay the same - Rough morning? Grab a beer. Powder day? The gone skiing sign goes up. Too hot to work? Mandatory company float. You get the picture - Here's to living it up with a beer in hand. Cheers! Check out our pubs in Bend, Boise, Portland, Denver, and San Diego. Find pub information and the latest happenings on our website at 10barrel.com. Follow 10 Barrel. Snapchat. Instagram: (at)10barrelbrewing. Twitter: 10barrelbrewing. Facebook: 10barrelbrewingcompany. Apocalypse IPA: 6.8% alcohol by volume. Joe IPA: 6.9% alcohol by volume. Sinistor Black Ale: 5.7% alcohol by volume. 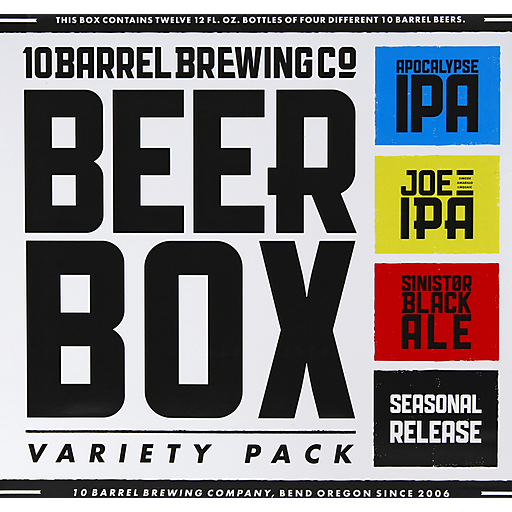